Why I need a Private Jet (and a Kia Soul)

Sincerely, I was going to just talk about the private jet but today, Tuesday June 10, I have had it.
So I added the car to the post.

So I’m on my way to get kilishi at Area 1 today bang out of a meeting which was super amazing btw, when something happened.

Ok lemme just summarize this by saying that Abuja toasters taya me. I’m not even flattered. I’m just tired. Ok granted sometimes I’m amused (the Christian brothers who are just SAD this girl z taken), other times I’m just a tad flattered (no makeup, nothing special just the glory), sometimes I’m livid (the money bag who sends someone to come and call me like today) and other times I’m irritated (by the one who thinks cos I’m on evangelism, He has the right to delay me and be asking stupid questions thinking the Christian hottie on evangelism should take ‘anything’ including flirting just cause she wasn’t to talk to you about Christ)

Ok the main reason behind this post is the private jet o jare.

So I’m airport bound this beautiful Wednesday morning (started the post yesterday. Plus you can’t be asking where I am going to na haba!!!)

and boy, am I grateful for air trips. I LOVE to fly. No not that I gaze into the skies and all ooo. Nope. I get into a plane and 85% of the time, I sleep off. The rest 15% sometimes I read, the other times, I stare at the skies (boring btw). Btw, hubs says I sleep on any trip and that if possible, I’ll sleep on okada. 🙁

Ok so when did my spec move from commercial planes to Beechcrafts and now private jets.
Last Sunday in church (DCC Abuja is a dream walahi. And my Pastor is a dream Pastor choi!!! Be dropping the Word HOT cos tz HOT!!!) as announcements were taken, it dawned even more on me that the same Sunday of Akikitan in Lagos was the same Sunday DCC Abuja was hosting ‘Freke in a special Mid year praise service called GREAT PRAISE.

I already knew about the program a week earlier but as it was being announced, it dawned on me that I was missing it. Omo, the same ‘Freke that I raved on and on about after MK’s Sound of heaven concert/Album launch here https://eziaha.com/2013/08/26/oh-soh-amazing-moments-freke/ . The same Freke my Booski had this to say about? 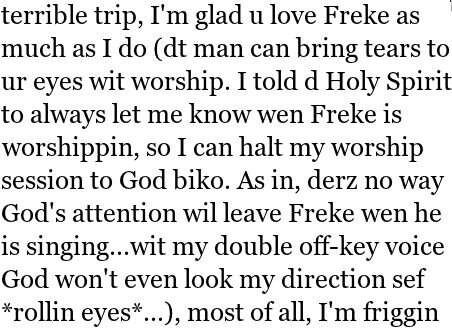 Same ‘Freke that made me love ‘Standing in the Gap for you’? Same ‘Freke? And I’m missing it? Heck no mehn!!!

I made a mental note then to move my already booked Wednesday flight to Sunday afternoon so that bang after GREAT PRAISE, I fly to the airport for an afternoon flight to gidi and then get in just in time for Akikitan at 4. So I rang hubs and told him. He didn’t seem convinced so he didn’t say much.

That afternoon just before LDM (which was an amazing service btw), I was chilling with a blog reader Ify who was coming for LDM and who I was meeting for the first time

Ify in red. Had to use this picture with Gloria too cos i love it

and when I mentioned it to her, she’s like I shouldn’t. What if the flight is delayed (as is the case with most afternoon flights) and I find myself still in Abuja till 4pm then 5pm and then I get into lagos as Akikitan is ending? Omo, that thought chilled me to freezing. Miss #Àkìkìtán? Ah!!! I realized I truly couldn’t have it both.

Ugh. Double Ugh!!!
Anyone who offered me a sure private jet trip to Abuja for Sunday would have been in my good books for ever.

Omo, that’s how I adjusted and chose to leave today instead. Painfully missing ‘freke.

And then, I thought about the people who owned private jets. The Pastors specifically. Especially the ones with huge ministries… The Joyce Meyer’s, Copeland’s, Oyakhilome’s, Adeboye’s, Oyedepo’s….

I thought of their incredible schedule. How do you depend on our absolutely undependable commercial airlines and meet up? People that can delay flights for 4hours. JMAD told me of a 10:45am flight that was delayed to 3pm. Imagine Bishop having to minister somewhere at 10am? And the 7am flight delays to 11am? Hasn’t the meeting ended by the time he gets to land?

But with a private jet, you can minister in 3 vigils in three different states in one night like Bishop does. JM for example can tour Africa and Asia in one week overseeing her numerous charity projects.

And a private jet is just the best option. Our roads are even super unreliable.

Rev talks about having a meeting in Lagos and he set out very early from Ibadan to Lagos only to sleep in traffic. My dear, he was in traffic till that meeting was over. If he had a private jet, will we be saying this?

Secondly, he was once on his way to Seychelles to minister Wednesday evening to Sunday. Ah, the host Pastor had gingered everyone on the Island of the Seychelles, ‘…Take leave and attend the program. A great MOG from Naija be coming…’ etc. Rev had to connect through Qatar and here in Naija, Qatar airlines delayed for one hour and on landing in Qatar, the connecting flight to the Island had gone, and the next flight wasn’t until Saturday. Imagine. A one hour delay leading to over 60hours delay. So if he lands on Saturday, he’ll only minister Saturday evening, Sunday morning and evening. As opposed to the morning and evening from Wednesday. All cos of a one hour delay in Naija!!! And someone still thinks MOG don’t need their own private jets. I am getting you!!!

I love the stories I hear from people like Copeland. How he has given out over 10 private jets. Whoop!!! Or how he has a private helipad in his office where his private jet lands directly. C’mon. Omo, I’m not averse to living the good life while doing ministry ooo

Evangelism driving round town is a better idea that trekking and then taking cabs ehn!!! 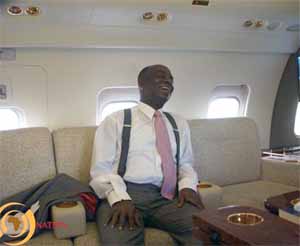 I’m sure some of these private jet critics won’t mind Bishop entering bus up and down looool. For them, christianity and sufferhead are synonyms. No dice baby. As you go higher in ministry work faithfully, God opens more and more doors for you.

Then the clowns that say it is the money from the poor and oppressed they use for private jet. Chai!!! I even read one ‘christian’ blogger lambast and lose bladder control over Oritsejafor for saying something like it is not the poor people who are funding the kingdom ooo. (My paraphrase). But seriously darlings, Papa Ayo didn’t lie. You won’t understand at a particular level till you are a bit privy to ministry dealings, but I’m laughing here real hard that people think tz offering from ‘gbo gbo e’ that buys private jet. ROTFL so hard.  Moreover I actually know that when I sow or pay my tithe, I should remove my eyes from the pastor/bishop and look to God for my harvest. Not to turn to monitoring spirit. And if I think the Pastors in my church are spending the money anyhow, (and I do agree that there is misappropriation and maybe unnecessary flamboyance in some churches/quarters) I have the right to leave. God can deal with them ooo. No need being under a ministry and talking rubbish and no need too NOT being under that ministry and talking rubbish too. Afterall, eez ziit ya money? We also need to understand and be careful about MOG. Things are really not always what they see and hmmn Oluwa is heavily involved.

Nigerians and drama sha. Ndi uchu!!! Na mighali onu n’ime ife n’agbasaghi ha. Anything gospel, they criticise. Like it gives them orgasms. And the ignorant (broke) believers join in. Business men, entertainers, football club owners, and politicians can have and fly private jetsssss but God forbid a man of God!!! Ezigbote ndi iberibe. Better repent. And shut up!!! And stop behaving like the anti-Christ. Yes anything against Christ and His kingdom is ANTI-CHRIST , simple. Btw, that blogger lost a follower both on blogsville and twitter after that. I just couldn’t deal.
Like PK would say, to some of these men, private jets to them are like cars to you (for some Okada). I know your poverty mentality can’t deal but try ehn. Tz not for show off, tz for ministry. Someone like my Rev that travels per second internationally. If I could, I for don gift am private jet since. Complete with pilot, crew and helipad sef. With how rude these commercial airline staff get. Biko ehn. I can’t even imagine my mama JM doing commercial.

Look ehn, not only will my hubby’s ministry have private jets, we will give out private jets. To ensure that this gospel is preached and heard the world over. 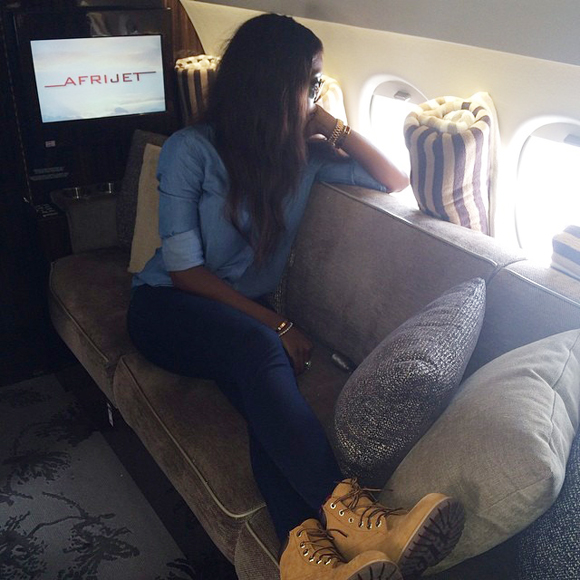 Oh btw, I saw that picture of Tiwa and loved the caption. She spoke truth abeg. You think if she (and other entertainers) could afford to, or were gifted a private jet, they won’t gladly become proud owners? Then when it comes to MOG people blab. Hiss!!! Abeg park well!!! And away from my sight too.

But right now, even at this level where I don’t need it as much as these men of God, I still hate the fact that I’m missing. GREAT PRAISE all cos I can’t trust Aero/Arik to leave at 1.45pm exactly as advertised. I don’t like the opportunity cost of this trip ooo. I really wanted to move from Great Praise to Akikitan Worship. Ah!!! And carry many people while at it cos many of my Abuja peeps want to make it too but can’t. If I had a private jet, no be to pack all of us in after Great Praise to Lagos and right back Monday morning in time for work/school?

I need a private jet jor!!!

All this gist we are sharing on SEX that you have not waka-d to read is not good ooo.
Chai! Chai!! Chai!!!
Better go and read WHAT NOBODY TELLS YOU ABOUT SEX on www.dccabujablog.com
Especially Singles.
Thank me later

PPS
If you are in Abuja, please attend GREAT PRAISE.

No further words.
You can click on the GREAT PRAISE banner at the end of the page for details.

So the Devil talks to YOU?

I’m building them NO ALTARS…